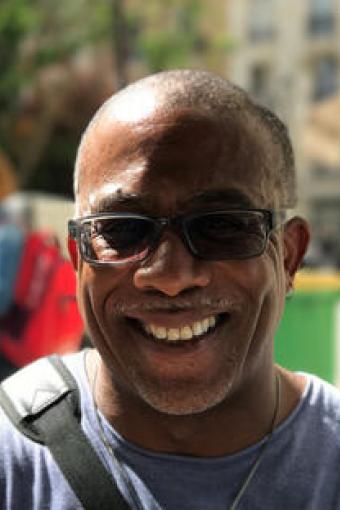 Dr. Bryan Carter received his Ph.D. at the University of Missouri-Columbia and is currently an Associate Professor in Africana Studies, at the University of Arizona specializing in African American literature of the 20th Century with a primary focus on the Harlem Renaissance and a secondary emphasis on digital culture. Dr. Carter is also the Director of the Center for Digital Humanities for the College of Humanities.

Most recently, Dr. Carter was the Keynote Speaker at the International Conference on Language, Linguistics and Literature (L3) in Singapore and has been invited again as a Visiting Professor at the University of Paris IV-Sorbonne.

"Recognizing that the Digital Humanities are of ever-increasing importance in the development of any culture, the question now becomes, how to nurture, develop and encourage COH faculty to naturally incorporate Digital Humanities into nearly all that we do as Humanists. Through this Center, we will explore the most effective ways to accomplish this task”.

He has published numerous articles on his doctoral project, Virtual Harlem and has presented it at locations around the world. His research focuses on advanced visualization and how sustained and varied digital communication affects student retention and engagement in literature courses taught both online and face-to-face.

Dr. Carter's experience with virtual environments began with his dissertation project on which he began work in 1997; a representation of a portion of Harlem, NY as it existed during the 1920s Jazz Age and Harlem Renaissance. This project, Virtual Harlem, was one of the earliest full virtual reality environments created for use in the humanities and certainly one of the first for use in an African American literature course. Virtual Harlem has been presented at venues in Paris, The Netherlands, Sweden, Hungary, and multiple sites in the US.  In 2004, the University of Paris IV- Sorbonne, funded the development of Virtual Montmartre. Dr. Carter was asked to be the project leader and was awarded the prestigious "Professeur Invite" from the Sorbonne to spend 6 months in Paris.  This project realized itself in the development of an interactive Web Site and a small 3D representation of the Lapin Agile, the oldest surviving cabaret in Montmartre which is still in operation. The evolution of Virtual Harlem was funded in 2006 by the National Black Programming Consortium and the Government of Norway with the development of Virtual Harlem and Virtual Montmartre in Second Life. These sites were two of the most important locations during the Jazz Age/Harlem Renaissance. Dr. Carter began teaching classes that met totally in Second Life in 2005 where his students have participated in role play, developed content and have collaborated with students from around the world.

In addition to these activities, Dr. Carter is very active with faculty development nationally and internationally. He has conducted workshops for faculty on Digital Humanities as well as specialized topics such as "Generational Learning Styles", "Podcasting", "Blogging", "Internet Broadcasting" and Second Life. He has done summer workshops for the National Council for Teachers of English on Digital Humanities, led a workshop session for the Digital Africana Studies Conference at the University of Maryland-College Park, conducted  workshops on Technology in the Classroom at Alabama A&M, and at international venues such as Vaxjo University in Sweden and the University of Paris IV-Sorbonne. Dr. Carter is regularly invited to venues around the world to offer keynote addresses or to serve on panels on Digital Humanities. Most recently, Dr. Carter presented several talks at the HumLab at Umea University in Sweden and conducted a several day technology workshop at the African American Literatures and Cultures Institute at the University of Texas, San Antonio.